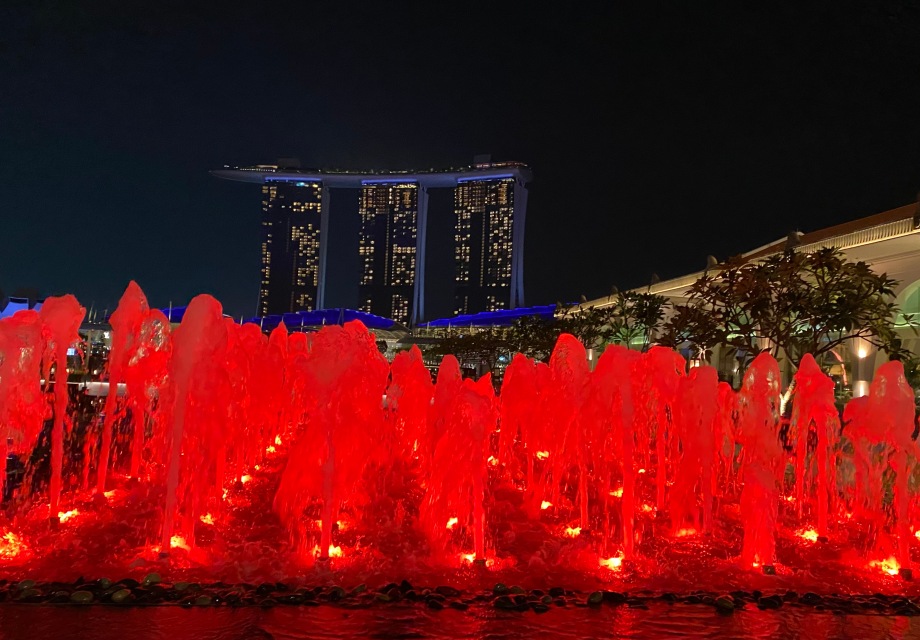 Eye candy. All lit up.

Singapore — In October, our kids usually have Fall Break from school. We normally travel to another country during this time, but since that is not an option this year, we decided to explore our backyard.

One night, my family and I cycled around Marina Bay. We started our journey along the Bay East Garden bike path, which straddles manicured swampland and a panoramic shore packed with architectural marvels. As we headed south from Tanjong Rhu, we gazed at multiple perspectives of iconic landmarks such as the Singapore Flyer, Marina Bay Sands, and the Flower and Cloud Domes of Gardens by the Bay.

My two girls, Sienna and Jasmine, were both born in Singapore. So when I tell them that these popular spaces were nonexistent when they were born, they say they feel really old. From my husband Noel’s and my perspective, however, all of these buildings popped up so fast. When we first arrived in this city-state in 2007, the skyline was dramatically different. From downtown, all you could see was a lot of dirt, construction vehicles, and big ships in the harbor for as far as the eye could see.

Singaporeans used to joke that when tourists came and asked what they could do here, the answer was always “shop and eat, shop and eat.” Today, the joke doesn’t land as well as it used to, because there are so many other activities, such as gambling, ziplining, going to Universal Studios, or watching the Formula One Singapore Grand Prix.

Singapore did not host the F1 this year due to the pandemic, but we did our own night race at the track. We pedaled as fast as we could in our own imagined competition, with nothing but the bay breeze getting in our way. We actually didn’t go very fast, partly because there was so much to take in. We all wanted to savor the moment.

There were many breathtaking moments during our bike ride. One of the highlights involved an uninterrupted journey through Olympic Walk, the Promontory, Esplanade and the Merlion. These areas are normally swarming with crowds. It was eerie to see these spaces nearly empty. Yet there was undeniable beauty in the lonely pathways.

We weren’t totally alone. There were several patrons enjoying food and drink along the One Fullerton strip. We joined them, ordering milkshakes at Overeasy. From our seats, we had front row views of Marina Bay Sands (where there is a hotel, casino, and mall), the ArtScience Museum (the white flower-like structure), and the Helix Bridge (the red strip on the right, which is a pedestrian path connecting Marina Centre and Marina South).

After our stopover, I took tons of pictures of the Merlion, the quintessential Singapore symbol. It’s not often one can get unfettered views without the throngs. Built between 1971 and 1972, the sculpture has the head of a lion and the body of a fish. The lion represents the country’s original name Singapura, which means “Lion City.” The fish is an homage to the nation’s roots as a fishing village.

We ended our two-hour journey by returning to Tanjong Rhu, via the Helix Bridge (with a double-helix DNA design) and the Marina Barrage, a dam and recreational space that harnesses energy from hundreds of solar panels, keeps seawater from Singapore’s first freshwater reservoir, and houses the mechanics for flood control. It seemed like everywhere we turned, there was something noteworthy to consider. Marina Bay may be a relatively new space, but it’s not lacking in significance or eye candy.

We had a smooth ride — so smooth, in fact, that the girls declared that it was super fun, and that biking is their new favorite activity. That was definitely music to my ears. We may have missed out on travel this year, but we didn’t skip a beat in the new discoveries department, even within a familiar place.