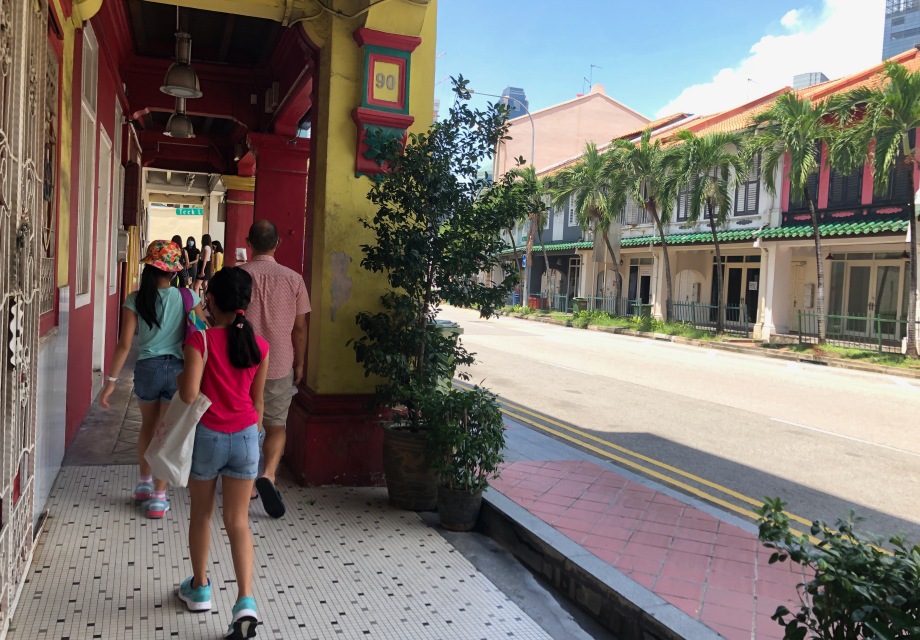 We recreate our village when we live far away from home.

Sunday, September 6, 2020 — We don’t venture out as much as we used to, but today we made the effort to make some new family friends (people we can go out with as a family). This “dating” of families is a common practice among us expats. In our home countries, we normally have family and friends with which to spend weekends, holidays, and special occasions. But, when we’re half a world away, we need to recreate our village. You know, to have those people we can call last minute and say, “Want to come over for dinner?” or “Let’s catch a movie” or “Can the kids play together at your house so we can take care of x, y, or z?”

The hope is that, one day, the relationship will grow to the next level. That’s when you’re asking people if you can list them as emergency contacts for the kids at school. Honestly, the bar is not that high for that sort of commitment in the expat community. It’s not unheard of for people to meet for the first time, and ask on the same day if they can be listed as guardians. It’s what you do when you don’t really know anybody in the country.

Just like dating for romantic purposes, sometimes we click with people, and hope to see more of them. Sometimes, it feels like dinner can’t end soon enough. It’s not that we’ve had terrible dates. With some folks, it just takes more effort to have natural, free-flowing conversation. These are things we often don’t always think about with people we’re comfortable with. Silences don’t become awkward affairs. With our best buds, we don’t have to fill the void with getting-to-know-you chatter.

Ever since the pandemic, getting together with new families has required more rallying of the troops. Everyone has been bunkered down for months. We’ve adapted to doing their own thing at home.

“Why do I have to go?” and “I’d rather stay in” are common responses to going out. However, I’m not liking our increasingly sedentary lifestyle, with everyone lost in cyberspace. Rules about screen time were a little more lax during our Corona Summer. But, now that we can venture out a little more, I have to tighten the reins again: Less virtual world and more real world.

Today, we went on a family date. It was not bad considering we split our group into two sets of four. Public gatherings here are currently limited to five people. The four kids banded together and us parents formed our own set.

We walked along the Tanjong Rhu promenade, which sits along the eastern bank of the Marina Reservoir. The children sped ahead in the pedestrian walkway while listening to various tunes on someone’s iPhone. The adults were a bit more leisurely, talking about where we’re from and what we do for a living while taking in views of Marina Bay Sands, Gardens by the Bay, and the Singapore Flyer.

It was a busy Sunday at the promenade. Dozens of families walked, cycled and scooted up and down the paved strip flanked inland by greenery: grassy fields, floral shrubbery, and reedy marshes. Towering adobe-like condos with orange-tiled roofs loomed along the northern section of Tanjong Rhu.

In 2007, when we first came to Singapore, my husband and I checked out a couple of units at Costa Rhu, a compound inside Tanjong Rhu with a massive pool, BBQ pavilions, a gym, and a couple of multi-purpose rooms for parties. There was something for everyone there: a playground, a tennis court, squash court, putting green, and a reflexology foot path. We decided against living there, because it felt too far away from the center of town.

Back then, all of the iconic landmarks on the other side of Marina Bay were nonexistent. The area looked remote even though it was only a 10-minute drive to the CBD (Central Business District). At that time, we had just recently arrived from the Philippines to the U.S. So, anything that smacked of the suburbs didn’t appeal to us.

Since we have now been in this Southeast Asian nation for a long time, you’d think we’d have already found our family mates. We have, multiple times over the years. Yet, as transient expat life would have it, our friends keep leaving. So, we keep setting up new meetings, hoping to recreate our village.

The hope is that, one day, the relationship will grow to the next level. That’s when you’re asking people if you can list them as emergency contacts for the kids at school.

Today, the family we met was from Michigan. So we talked about their state, my home state (California), Noel’s home state (New York), and the state of the U.S. today. Talking about the latter has been a tricky thing lately. Since we are still getting to know these people, we don’t know where they stand in the political spectrum. Politics is not normally a factor in choosing friends, but with all the hot-button issues stateside of late, it’s hard to stay away from controversial topics, particularly with fellow Americans.

Even if we talk only about Singapore, the issue of masks and social restrictions naturally come up. Both my husband and I always try to understand different points of view, and we don’t necessarily dismiss people just because we don’t see eye to eye with them. However, lately, we’ve found ourselves treading a little more lightly around certain topics, of which I’m uncertain is the best thing to do.

When we’re dating people, isn’t it best to know where they stand on important matters? On the other hand, if we get off on the wrong foot, we might overlook the really cool things about them, and the fun stuff we could do together. My husband and I don’t agree on a lot of things, but somehow we’ve learned to create an awesome life together.

One of the things that expats like to talk about is trips. After all, being able to travel around the region is one of the perks of living in Asia. We traded stories of our separate jaunts to Chiang Mai, Thailand. They had gone during a New Year’s holiday and we went around Thanksgiving. We both witnessed a lantern release into the sky. We agreed how remarkable it was to see the windswept torches gracefully ascending and winding into the horizon.

Then, we realized how long it had been since we all trekked to another country. Exploring new places is like air to many expats like us. It’s the thing that keeps us going when we get homesick, or when we’re trying to handle everything abroad without family support. For a moment, we shared a bittersweet sigh. How lucky we were to have been able to visit these amazing places. Yet, how much we missed our expeditions.

Today’s family date turned out pretty well. We said our goodbyes, but as we do when we’re out and feeling happy, my family and I didn’t go home just yet. We drove to Tanjong Pagar, passing by more views of Marina Bay Sands and the Sri Mariamman Temple (the oldest Hindu establishment in Singapore) along the way.

We parked at Neil Road get some ice cream. There’s a little hole in a wall called Apiary, which makes divine artisanal treats. I mean, take a look at these gorgeous, creamy scoops.

Apiary is known for their unique flavors such as Blue Milk (made with blue pea flowers) and Apiary Honey. Between my husband, kids, and me, we shared those flavors, plus Matcha Green Tea, Milk Chocolate Cookie, Banana Walnut Brownie, and Lavender. The Lavender! It scent reminded me of the sweeping lavender fields in Tasmania. Heavenly.

After our ice cream indulgence, we walked back to the car, noticing the Shake Shack housed in a historic building which used to be the Eng Aun Tong factory, where Tiger Balm was made. Behind the neoclassical structure is a 50-story residential tower called The Pinaccle@Duxton. The building, which was completed the year my 10 year old daughter was born, has won many design awards, and the elevated viewing gallery was used in 2010 by Prime Ministee Lee Hsien Loong as a stage for his annual National Day address.

The sight of the modern tower and the historic establishment seemed like appropriate ending punctuations for our day. The family dating thing is a never-ending cycle of new alliances in old situations. We’re always looking to fill the void of companionship with other mates. Yet, in our constant effort to make new chums, we’ve amassed quite a collection of relationships. Many of these folks now live in different places. There’s comfort in knowing we are connected to so many people around the world, even if the only thing we had in common was living in Singapore.